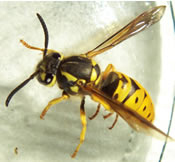 The honey bee is not native to North America.  Recognizing their extreme importance to the environment and their way of life, the bees were brought here by European settlers during the colonial times.  The bees served as pollinators to their crops and provided beeswax and honey.

Honey bees remain a beneficial insect in New Jersey as well as other parts of the United States.  They are responsible for pollinating approximately 80% of the fruit, nut, vegetable and grain plants throughout the United States.

According to a report from Environment News Service on January 10, 2012, the nation’s honey bee population could be in serious danger.  Researchers out of San Francisco State University have recently discovered that many honey bee nests have been invaded by a fly parasite which renders affected honey bees into a “zombie-like” state of being.  Their research has shown that “The fly, Apocephalus borealis, deposits its eggs in a bee’s abdomen. Usually about seven days after the bee dies, fly larvae push their way into the world from between the bee’s head and thorax.”  Bees that survive the attack are disoriented, walk around in circles with no sense of direction, abandon their hives (or are thrown out by other bees), and tend to congregate near lights.  It sounds like a strange science fiction movie!  Some researchers speculate that this parasite could be the reason for the honey bee colony collapse disorder.  You may read the full article here.