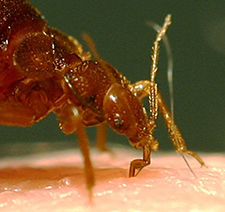 New York City bed bugs are reportedly on the decline, but most other locations in the United States are not faring quite as well.  On any given day you can read stories of people who are subjected to bed bugs at their workplace, bed bugs in hotels, and bed bugs in single family homes.  Bed bugs are especially problematic in multi-unit housing units from coast to coast.

Many cities in the State of Ohio have been fighting the bed bug battle and losing ground daily.  In an effort to gain the upper hand on the problem, some landlords are making the tenants responsible for bed bugs by making them sign stringent contracts making them responsible for pest control responsibilities.

10TV.com reported on April 27, 2012 that tenants at a Columbus, Ohio apartment were given a pest control addendum to sign along with their lease renewal.  According to reports, the addendum required the tenants to:

• Certify that their apartment was currently free of bed bugs. – Not bad

• Agree to notify the landlord if any bed bugs were to appear. – Not bad

• Cooperate with pest control if bed bugs appeared. – Not bad

• Pay for all of the costs of extermination! – What!?

• Pay for all of the costs of exterminating other units if the bed bugs spread! – No Way!

• Agree that they would immediately lose their apartment and their lease would be terminated if they had bed bugs! – Wow!

Tenants who live in an apartment building are easily subjected to bed bugs that are in any other unit within the building because bed bugs travel between the walls and along the electrical wires and piping.  While some tenants may be honest and tell the landlord that bed bugs have appeared, perhaps another tenant may not be as forthcoming thus allowing bed bugs to spread.

It’s these kinds of strange rules that drive people into silence about bed bug infestations!  Incidentally, the tenants did not sign the addendum and were issued a 30 day notice to vacate the premises!  Unbelievable!