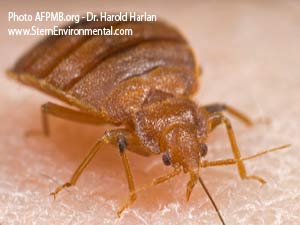 Sometimes in a weird twist of fate, you find yourself trying to do a good deed, only to create a bad situation, and subsequently your good intentions end up making a lot of people really mad.

Recently a 69 year old retired minister in Denver was trying to do a good deed by helping archive historic books for the Denver Public Library.  Apparently he would check out historic books, some dating as far back as 200 years.  His apartment, which is owned by the Catholic Archdiocese of Denver, has bed bugs.  The minister did not realize that the creepy crawlers would choose to hitch a ride back to the library in the rare books he was working on.  Not long after the books were returned to the library, the bed bugs were discovered and the affected books were quarantined from the general public, but the library was infested with the creatures.

The library then asked that the remaining books in the minister’s possession be dropped off at the library in a secure location so that it would not be re-infested.  Sadly, the books were placed in the main book drop area instead.  The end result was that the entire library had to be fumigated again.  The library chose to destroy 31 volumes of rare books in their collection because of the bed bug infestation problem.

The cost to eradicate the bed bugs was $6,000 and the cost of the destroyed books was $12,000…all of which they want the retired minister to pay.

The library could have salvaged the books by using the Packtite Portable Bed Bug Killing Heat Chamber or even the Bed Bug Oven offered at Stern Environmental Group instead of destroying them! By “cooking” the books in Packtite or the Bed Bug Oven, the bed bugs plus eggs would have all been killed and the books saved.