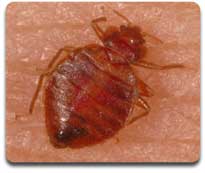 Sometimes real life drama plays out on television and it is just plain hilarious.  For the fans of 30 Rock, they were in for a treat last week if they viewed the episode called “Audition Day”, which should have been called “Don’t Let the Bed Bugs Bite”, in my humble opinion.  In the episode, Jack had a bad case of bed bugs which caused him to be shunned by everyone he knows. These “chew daddies”, as the show called them, were so bad that not only would nobody touch Jack for fear of catching bed bugs; but he was also banned from using the company car and forced to use the subway (oh no), itching all the while.

Many real life people have also experienced the same sort of discriminations that Jack encountered when they have a bed bug infestation.  If you ever browse through the internet and read bed bug victim’s blogs you can read first hand how people are ostracized by family, friends and co-workers once they find out that someone has bed bugs.  You can’t really blame non-bed bug victims however, because who wants those blood suckers in their home or business?

It’s important to remember that you are not alone in the fight against bed bugs.  Bed bug infestations can now be found in all 50 states.  They have plagued the finest hotels, cleanest office buildings and homes, and even a past President’s office.

If bed bugs are making you feel like a pariah in New York or New Jersey, it’s time to call in the pest control experts who knows how to get rid of the buggers once and for all!