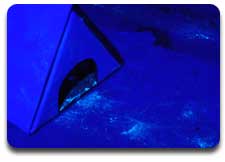 Another neighbor reports using a sticky trap in his laundry room to catch a field mouse home invader.  The trap worked great as a mouse was caught within hours.  Unfortunately his wife found the attached mouse…and she does not like mice.  She begrudgingly carried the attached mouse to the garage to have her husband dispose of it when he got home.  Hours later, she returned to the garage to find another mouse stuck to the trap as well.  Killing two with one trap, sounds pretty good!  A short time later she returned to the trap to find that only one mouse was on the trap and three extra feet and part of a tail from the missing mouse were stuck to the trap!  YUCK!  The second mouse chewed off its own feet and tail just to escape the trap.  One more trip to the garage before her husband returned home revealed no mice on the trap and instead a snake was attached to the sticky trap with a bulge in its belly!  Despite their best efforts, they were not able to remove the snake off of the trap so it encountered an untimely death.

The new guidelines from the CDC are to only use a baited snap trap when catching mice or rats.  Setting the traps can be tricky as it is easy to trap your own hand instead, which is quite painful.

Save yourself the pain and potential health hazards, and call a licensed pest control expert who is trained in rat and mice removal services.  Stern Environmental Group uses not only traditional resources for removal of rats and mice, but also the innovative Track and Trap System in their arsenal of services.  This incredible device allows the Stern experts to track the paths of mice using UV light so that the nest and entry points can be discovered and mice can be sealed out once and for all.