The winter months are fast approach on the east coast and humans are not the only ones that are gearing up for the cold months ahead.  New York City and New Jersey pest control professionals report that many other creatures that spend the warmer months outdoors are now looking for a warm spot to hunker down in to escape the upcoming blast of Old Man Winter.

It may begin as an unexplained bang here or there, or maybe some strange scratching noises, or perhaps you’ll hear scampering in your attic, ceiling or wall voids.  The threat of rodents entering your attic is a problem says pest control experts.  Raccoons and squirrels are common rodents that invade homes as the winter months approach.  These pests often cause serious problems for residents in New York and New Jersey as they chew through electrical wiring causing electrical shorts and a fire hazard.  Once these pests arrive, they send pheromones out to others of their species inviting them to join them.

Raccoons are extremely agile creatures that will gain access to your home by tearing attic vents, soffits, and even shingles and roofing boards up.  Their paws are strong and resemble those of a human with long claws attached. Raccoons are curious creatures and scavengers that leave a trail of destruction in their wake.  Raccoons use attics at a nesting site to raise their young and reside as a family.  They defecate and urinate at will, causing serious damage and health threats to humans.

Squirrels may seem fun to watch as they frolic in the trees and garden, but once they gain access to your home, they are a menacing pest to encounter.  Squirrels can squeeze into small openings and gain access to an attic.  If they opportunity presents itself, squirrels won’t hesitate to venture into the main area of the house, helping themselves to food and causing enormous damage as well.

Raccoon and squirrels should not be poisoned to be eliminated and should instead be trapped by a licensed pest control professional with experience in rodent removal services.  For expert services in New York and New Jersey, contact Stern Environmental Group. 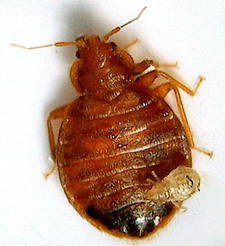 The ink is barely dry from last week’s reports about the results of the study that was conducted by entomologists at Virginia Tech.  In the study, researchers found that modern day bed bugs are now able to produce a slew of enzymes that destroy the insecticides that are supposed to be killing them.  A few years ago, researchers found that bed bugs had altered their nerve endings which prevent typical pesticides from binding to the nerves.

New York City pest control experts can attest to the fact that bed bug infestations continue to rise throughout the United States.  In many areas of the US, pest control professionals are finding bed bugs that are hugely resistant to pesticide applications, no matter what type of chemical compound is used.

Thespec.com reported on October 27, 2011, that CityHousing in Canada has been having difficulty with bed bugs at all of their housing locations for many years.  According to their report, CityHousing has tried a variety of treatment methods to rid the buildings of the bloodsuckers, yet they still remain.  CityHousing bought a bed bug sniffing dog, only to find out that it was deemed to be unfit for work.  They utilize a super-size industrial steamer to kill bed bug eggs.  Certain items are subjected to freezing and others to heat treatment.  Units are cleaned, vacuumed, and laundry completed according to protocol.  In addition, CityHousing also purchased a thermal remediation unit which will heat a housing unit to 168 degrees Fahrenheit for $60,000.  Despite the extensive efforts to kill the bed bugs within their housing units, the bloodsuckers still exist.

The idea of a “bed bug superbug” is frightening and still being debated by researchers, yet it is apparent that they likely do exist in some locations in North America.

Bed bug infestations have sparked many new inventions over the past few years say New Jersey pest control professionals.  Some products have proven to be advantageous and others have been complete flops. 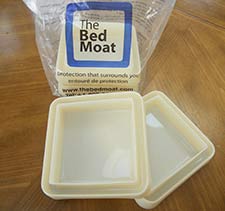 Each year “Pest”, a magazine that is geared for independent news for pest professionals in the United Kingdom conducts a contest and issues a special award.  For the contest, readers are able to nominate their favorite pest product that they feel “has made the greatest improvement to their lives and/or working practices.”

The manufacturer/distributor of the winning product will receive the “Pest Best New Product Award 2011” trophy and certificate.  Additionally, the winner will be able to display the special logo on packs, literature and their website as well.

This year, one of the twelve finalists that have been chosen is the Bed Moat.  Originally launched at the Chicago Bed Bug Summit in 2010, the Bed Moat serves as an excellent early monitoring system for homes or hotels.  The Bed Moat is a small, square, plastic device that is placed under the legs of beds and furniture.  The slick polished interior and special design traps approaching bed bugs in the outer ring so that they are not able to reach you in the bed or furniture that it is place under.  Any bed bugs escaping the furniture trying to go back into hiding will be trapped in the inner compartment of the device as well.

Readers of “Pest” can vote on their favorite pest control product until midnight October 28, 2011 by emailing the editor at editor@pestmagazine.co.uk .

You can find the Bed Moat and many other useful bed bug devices to help protect you while at home, or while traveling, at Stern Environmental Group.

New Jersey pest control experts know that for many people they are one of the most feared insects on the planet.  Excellent at hiding in all sorts of locations and always on the hunt for their next victim, the Cimex lectalarius, otherwise known as Cimicidae, or bed bug, is a formidable enemy to encounter.

It’s no wonder that bed bugs are so highly feared throughout the United States.  Thanks to their recent resurgence over the past few years and extensive media coverage, more people are becoming aware of the pitfalls of encountering this tiny vampire.

New Jersey pest control experts report that many home and business owners often try in vain to treat bed bug infestations on their own.  Because bed bugs are so elusive and multiply quickly, it is not uncommon for a pest control company to find that a small infestation has exploded into a large one.

In an effort to obtain education, find area pest control companies and useful products, and find ways to control the creepy bloodsuckers with homemade remedies, many people have turned to the internet for information about bed bug infestations.  The New York Times reported on September 5, 2011 that the search engine Google has experienced an increase of “83 percent in the last year and 182 percent for bedbug-related searches in the last four weeks compared with the same period a year earlier.”

Although it may seem like a good idea to try to treat bed bugs on your own initially that decision is often times one that becomes regretful.  Many people have discovered that over-the-counter products that are offered for bed bug control are not effective.  Some people have resorted to using incorrect products, such as bug bombs, for treating bed bugs.  This type of product does not work as it drives bed bugs to run away from the flow of the pesticide and spreads the infestation throughout the home or into neighboring units of shared housing.  Some people have taken the advice of what they have seen or read online and caused serious fires and injury to their family and pets.

NJ pest control experts say that bed bugs are one type of pest that requires the help of a licensed pest control professional with experience in bed bug eradication. 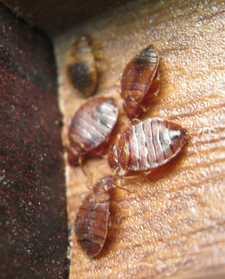 Mostly gone from America’s landscape until about ten years ago, tiny little vampires have crept back in while nobody was looking.  No…not the ghoulish ones you find lurking in the shadows on Halloween night.  These little vampires hide in your homes in all types of cracks, crevices, and furniture both big and small.  Walls, ceilings, carpet, draperies, and appliances are not off limits to these creatures.  They come out in the wee hours of the morning when humans are dead asleep. They slowly creep up on their sleeping victim, stab them with their mouth part, inject a numbing agent to hide their presence, and commence with their feasting of blood.  They are bed bugs…and they are alive and well throughout America.

DDT was a powerful and popular pesticide that was widely used in homes throughout the United States for controlling cockroaches and bed bugs.  It had an amazing kill on contact rate and residual kill rate as well so all creepy crawlers that crossed its path were doomed.  Deemed safe for a number of years, in 1972 it was banned by the Environmental Protection Agency.

Until recently, it seemed like we were stuck having to deal with bed bugs in America with no hope in sight of ever again having a chance of fully eradicating these bloodsuckers.  Thanks to researchers at Virginia Tech, it appears that bed bugs might not win the war after all say New York City pest control experts.  Thestar.com reported on October 21, 2011 that researchers at Virginia Tech “may have unlocked a secret that will help crush the bloodsucking pests for good.”  Scientists have uncovered a “genetic mechanism” bed bugs use to resist the insecticides that are meant to kill them!  Scientists are hoping that this new information “will be able to keep track of growing resistance and create new strategies for eradication.”

Time will tell if this new breakthrough will be the key to successfully eradicating America’s most hated pest.