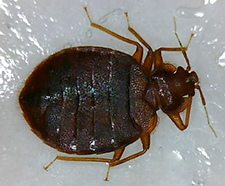 Being on the dinner menu for bloodsucking parasites is an un-nerving proposition for most folks.  Once people realize that bed bugs are in their home, it is not uncommon for panic to set in.  Panic can lead to people to doing crazy things in an effort to not be bitten by bed bugs.  DanburyPatch reported on January 4, 2012, that a bed bug educational meeting was hosted for parents by the Danbury School system after they learned that a parent had washed their child’s hair in kerosene to kill bed bugs this fall!  You may read the article here.

In another story, WWMT.com reported that a Kalamazoo man accidentally caught his bedroom on fire and forced the evacuation of his apartment complex when he was looking bed bugs in his box spring.  According to the report, lacking a flashlight to investigate, the man used a lighter to look for bed bugs in his newly purchased box spring.  The lighter accidentally ignited the bed causing damage to his apartment. You may read the article here.

Desperate American’s have used bug bombs to try to kill bed bugs, which have proven to make them spread from room to room.  People have washed their children in gasoline and insecticides in an effort to avoid being bitten by bed bugs at night.  In addition, some people have even used outdoor pesticides indoors on their bedding and other areas in their home to try to kill the bloodsuckers.  These remedies have all proven to be dangerous and are not recommended by the CDC as they have made many people ill.