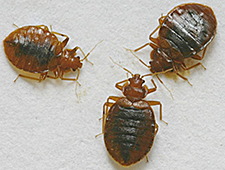 New York City has been touted by some pest control experts in other parts of the world as being the bed bug capital of the United States.  Nearly wiped off of our radar screen in the 1950’s, bed bugs have certainly made a comeback on America’s landscape.  They have now reportedly been found in all 50 states.  Larger U.S. cities, with more dense populations, understandably have had more trouble with the bloodsuckers, but bed bugs are indiscriminate blood thirsty characters.  They do not care where you live or what your economic status is.  They are after one thing…blood…preferably from a human host.

Scientists in the United States have previously reported that bed bug infestations have become more difficult to kill from coast to coast.  Modern day bed bugs have been able to transform themselves so that they can withstand current pesticide treatments that are available to New York, New Jersey, and other pest control professionals across the United States.  Bed bugs that are found today have mutated and now have a stronger exoskeleton which is able to withstand pesticides that are used by pest control experts.  In additions, this new breed of bed bug has also changed its genetic makeup which has further enhanced its ability to survive.

JunkScience.com reported on April 16, 2012, that “mutant bed bugs” have now been discovered in Scotland.  Pest control experts are finding that Scottish bed bugs are now twice as difficult to kill in comparison to years past.  According to reports, policy makers and scientists in Scotland are looking at new ways to try to combat the bloodsuckers before they become more of a problem than they already are.  Their discovery of “mutant bed bugs” appears to be the same troubles that we are experiencing here in the United States.  You may read the article here.

Trying to kill NY or NJ bed bugs on your own will prove to be an uphill battle as they are masters at hiding in odd places.  Their tiny size and their ability to multiply quickly make them one of the most frustrating and most difficult household pests to eliminate.  Store bought chemicals have proven to be ineffective on bed bug infestations.  Your best bet for treating NY or NJ bed bug infestations is to contact a licensed pest control expert with extensive experience in bed bug eradication services.