Bed bug infestations a home is not like any other type of insect.  The realization that little bugs attack you while you are sleeping will drive even the sanest person to desperate measures to try to rid their home of the pesky little vampires.

The Centers for Disease Control and Prevention (CDC) has issued a health advisory this week about the health issues that consumers face when they misuse pesticides in their homes.  According to NBCNEWS.com on November 28, 2012, the “federal health officials are alarmed by the growing reports of pesticide misuse and poisonings” that are reported in the United States.

Reports are that between 2006 and 2010, there have been 129 people who have suffered mild to serious health harms when pesticides that are deemed safe for exterior use have been used on the interior of a home.

Out of desperation to rid their home of the bloodsucking pests, many people do not understand the dangers involved with using pesticides incorrectly.  It is not uncommon for consumers to buy pesticides and apply them liberally without reading the instructions or the warning labels.  Often times the pesticides that are used are not used for the pests that people are trying to kill, which causes consumers to reapply pesticides continuously without much thought as to the after-effects of the pesticide usage.

Many consumers do not realize that the instructions and warning labels that are included on every bottle and spray form of pesticide is the “LAW”.  The regulations for any particular pesticide have been created to protect consumers so that they do not become ill, or worse yet, cause death among those who use these products.

For the health and safety of your family, it is always best to hire a licensed pest control expert to treat bed bugs or any other home invading pest.  The expertise offered by a pest control technician of pesticide application will ensure proper application so that your family is safe from pesticide poisoning.

New York City is not the only place where rat populations have taken a strong-hold.  Once rats move into any area, they are a particularly hard pest to control without extensive efforts by a rat control expert report Manhattan pest control professionals.

NBCMiami.com reported on November 15, 2012 that the beautiful landscaping, vegetation, and wildlife of the Galapagos Islands are under serious attack by Norway and black rats.  These rats are not native species to the island; rather they were introduced on accident via buccaneers and whaling ships dating back to the 17th Century.  Several centuries later and the non-native rats are completely out-of-control as they do not have any significant prey to keep their population in check.

According to reports, officials in the Galapagos Islands have decided that enough is enough, the invasive island rats must go as they are destroying natural habitat and feeding upon wildlife.  Giant tortoises, snakes, lava lizards, eggs, hatchlings, hawks, iguanas, as well as many varieties of plant life have fallen prey to these fast multiplying invasive rats.

The massive killing of the rats is being dubbed “ratmageddon”.  Hundreds of millions of rats on one island were targeted on November 14, 2012 with nearly 22 tons of specially designed poison which was dispersed throughout the island from helicopters.  The special poison was developed by the US company, Bell Laboratories, which created light blue cube sized poison squares. The squares are said to disintegrate in a week or so and are not believed to harm other types of island wildlife.  Because of the anticipated mass-kill, the poison was created to contain a “strong anti-coagulant that will make the rats dry up and disintegrate in less than eight days without a stench.”

Maybe these poison blue cubes will prove to be fruitful and perhaps the EPA will approve their use on cities with rat infestation problems as well. 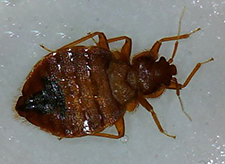 Many businesses have learned a valuable lesson that being associated with bed bugs is not necessarily a good thing, unless you are a licensed pest control operator that is.  Bed bugs carry a negative reaction for most people as they are a hot topic in the media.  These tenacious blood feeders have been nibbling their way across the United States, making pit stops in communities both large and small.  Bed bugs have appeared in all types of environments that people frequent…homes, apartments, office buildings, hospitals, courthouses, airports, etc.

The Winston-Salem Journal reported on November 16, 2012, that a furniture store in Indiana has recently changed their name and moved locations as a result of bed bugs.  Co-owner Dennis Hawk said “When we first started the name, it was instant name recognition — that cute little saying, ‘Sleep tight. Don’t let the bedbugs bite. People immediately identified with that name and thought we were a big chain.  What was a good marketing tactic years ago, could be taking a bite out of business in todays bed bug infested society.”

Mind you, the furniture store is NOT known for having any products that have bed bugs in their inventory.  Instead the apparent trouble the store has run into is the strictly associated with the past company name “The Bed Bug Furniture and Accessories Store”.  Reports are that after ten years doing business under the previous name, the owners have decided that it is best to step away from the negativity that “bed bugs” bring to mind for customers. The new company name is now “Comfort with Style Furniture & Mattress”.  Along with the new name for the furniture company has come a new location as well.

Time will tell if the new name will prove to be profitable for this company, but it is likely that customers will appreciate not thinking about bed bugs when they buy new furniture.

Reports of bed bug infestations might be slightly better in New York City, but in most other areas of the United States, bed bugs are still in full attack mode.  Some parts of the United States are just seeing the bloodsuckers in their communities and pest control experts are scrambling to keep up with their new enemy.

Entomologists throughout the world are continuously looking for new ways to combat bed bug infestations.  New research has been completed by four entomologists who could have the most promising results that have been found to date.  Their study has been reported in the most recent issue of the “Journal of Invertebrate Pathology”.

According to PHYS.ORG on November 20, 2012, the scientists have tested a natural fungus which causes diseases in insects to see if the “superbug” is susceptible to the fungus.  Beauveria bassiana (the fungus) was sprayed on paper and cotton jersey material and allowed to dry overnight.  Then groups of 10 bed bugs were placed on the fungus exposed surface for one hour.  The bed bugs were then removed and placed in a petri dish where their progress could be monitored.

The scientists are hoping to begin field work soon.  It would be great to see a biopesticide be created so that pest control professionals have another option to offer consumers in the fight against these blood sucking pests. Until then, if you have bed bug in New York, NYC, or New Jersey, contact SternEnvironmental Group. 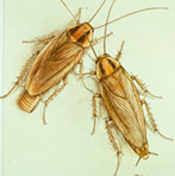 Anyone who has ever dealt with cockroaches in the home or business knows that they are the most difficult pest to live with and fully eradicate.  Cockroaches have an amazing ability to escape death, even when it comes from the bottom of a shoe!

Watch the attached cockroach video, it truly is amazing!  It is unbelievable to think that these pests appeared to be dead, only to somehow dry out and awake the following day ready to face the world once again.  Perhaps they are the stealthiest bug in the world.