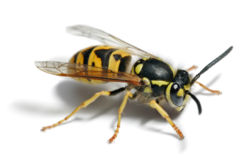 Yellow jackets are one of August’s more unpleasant pests. These aggressive predatory wasps are most numerous in late summer and early fall. They live in massive colonies of 4,000 to 5,000, building their nests in the ground, in trees or shrubs, and in protected places around your home, like eaves, attics, sheds, etc. A single yellow jacket is capable of stinging multiple times. If their nest is threatened, they will swarm out and attack aggressively.

In Cowpens, South Carolina a man died this past Saturday from yellow jacket stings. Michael Goodwin, 52, ran over a ground nest while mowing his lawn that morning. Within an hour he had died of anaphylactic shock which caused his airway to swell, effectively suffocating him.

Goodwin had been stung before with no severe reaction, but that’s the problem with yellow jackets and, in fact, most bees and hornets. Repeated exposure to venom can result in dangerous, even fatal, symptoms, despite a lack of previous problems. Goodwin worked outside and according to his son, John, “He’s been stung probably a hundred times in his life, and it never flared up like that.” Over time, sensitivity to venom can increase to dangerous levels.

As summer barbecues give way to fall tailgate parties, watch out for yellow jackets zeroing in on sugary drinks, ripe fruit and overflowing trash cans. Insect sprays and powders can be used to control nests in lawns, but anyone who is worried about a nest or who is planning a large picnic or outdoor wedding should consult a professional exterminator.

Avoid yellow jacks when possible. If one flies near you, do not strike at it or run rapidly as quick movements will provoke an attack. Although humans can outrun the wasps, which have a top flying speed of 6 to 7 mph, you could suffer more than a dozen painful stings triggered by your movement before you could run out of range. Don’t strike or crush a yellow jacket against your body. This releases an alarm pheromone that can incite a frenzied attack. If yellow jackets are bothering you, your best defense is to cover your face with your hands and back away slowly, making sure not to step on a ground nest. Move indoors if at all possible.

There is nothing like a few unwelcome guests invading your home to make life miserable. Occasionally insects or wildlife may decide to come calling and, charmed by your gracious hospitality, decide to stay awhile. Stern Environmental Group provides expert residential pest control and pest management services guaranteed to send such unwelcome guests packing in a hurry.

Your home is one of the single largest investments you’ll make in your lifetime. Protecting it from the destruction and health hazards caused by invading insects or wildlife is a job for the experts at Stern Environmental Group. Utilizing the most effective products and methods available, our highly trained and experienced professionals will ensure that your family and home are safe and secure from unwanted pests.

Stern Environmental Group provides bed bug extermination, carpenter bee control, nuisance wildlife control, capture and removal of squirrels, raccoons, skunks, feral cats, and many other insects and nuisance urban wildlife. If it creeps, crawls, skitters, scampers or slinks, we can get rid of it for you. We are a member of the New Jersey and New York Pest Control Associations and provide insect and wildlife control and management services in most of New Jersey, all of New York City, most of Long Island, and parts of New York State and Connecticut.

Visit our website for complete information on the services we offer. Click the post title to learn more about our residential services. We also provide commercial pest control and pest management services. You’ll sleep well tonight when you get “Stern” with your pests!