Complaints of bed bug infestations continue to rise; despite extensive eradication efforts report New Jersey pest control experts. Because of their nighttime antics and sneaky behavior, it’s easy for bed bug infestations to go un-noticed for an extended period of time. It is estimated by NJ pest control experts that most people do not realize that there could be some type of bug causing bites in their home until the bed bug population has reached an army of over 200 or more.

It is estimated that about 50% of people that are bitten by bed bugs suffer from the allergic reaction from their bite wounds. Bed bugs prefer to bite humans, but will turn to cats, dogs, birds, or rodents if they are hungry and a human blood meal is not easily available. Unlike ticks, bed bugs do not latch on and stick with their victim. Instead, bed bugs creep up on their sleeping victim, usually in the wee hours of the morning. Bed bugs have two beaks for feeding. With one, they stab their victim and inject an anesthetic so they can numb the feeding area. With the second beak, they leisurely suck blood. It will take about 5 to 10 minutes for a bed bug to become fully engorged. Once bed bugs are done feeding, they will scurry away to digest their blood meal.

The allergic reaction to bed bug bites can leave red itchy bite marks that resemble flea or mosquito bites. New Jersey pest control experts warn that bed bug bite symptoms can appear within a few hours after being bit or up to 10 days after being bit by the little vampires. Bites can appear in lines of three, often referred to as “breakfast, lunch and dinner” or can be sporadic throughout your body, neck and face. Bed bugs are lazy creatures and will often choose to dine on skin that was exposed during their nighttime hunt, rather than covered areas, but because of their small and sneaky behavior, no skin source is off limits to these creepy bugs!

It’s important to contact a licensed NJ pest control professional immediately if you think you have a NJ bed bug infestation in your home.

An increasing number of people living in New York City and New Jersey and in other parts of the nation are blood meals for the odious bed bugs. However, sometimes the red welts are not due to bed bug bites. People need to get confirmation that the rashes have actually been caused by bed bugs. Even doctors have incorrectly diagnosed skins welts as being produced by bed bugs.

The rashes often look like those caused by mosquitoes although the bed bug caused rashes usually last longer. Flea bites typically have a red dot in the middle which is not the case for bed bug bites. However, flea bites often are placed in rows which can happen with bed bug bites.

About one-third of the human victims of bed bugs do not have a skin reaction. So, an apartment in New York City or New Jersey could have a bed bug infestation without the residents realizing they need bed bug treatments. Bed bug monitors are excellent devices for revealing a bed bug infestation. 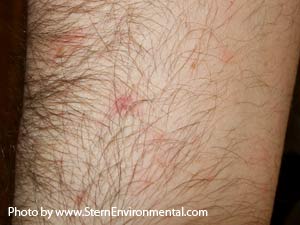 The recent reports of bed bugs arriving on the Upper East Side of New York City have many residents in those neighborhoods in a whirl.  People who are not living the high life in the poshest real estate in the United States might be scratching their heads however; because they have been dealing with the nocturnal blood suckers for quite sometime.  In fact, so have the residents of the Upper East Side!  Bed bugs reports have actually been on the rise throughout the City since 2004.

It is a common misconception that bed bug infestations only occur in poor communities or homes that are unclean.  Bed bugs do thrive in cluttered environments because they provide ample hiding spots for safe harborage and multiplication.  Being poor or unclean is not a criterion for having bed bugs.

Bed bugs do not discriminate.  They don’t care how much money you have in the bank, where you live, or where you work.  The simple fact is that they want a blood meal, preferably from a human source, but pets will do in a pinch.

Bed bugs are not a pest that can be eradicated easily and “do it yourself” treatment doesn’t work.  It is always wise to call in a licensed pest control specialist when you have a bed bug infestation.  Stern Environmental Group provides expert bed bug services to Secaucus, New Jersey, the Greater New York City Metro and Connecticut Regions.  Give us a call today!

At Stern Environmental we realize that people living with bed bug infestations have to deal with the annoying skin irritations on a daily basis. We also realize that bed bugs infestations and bed bug bites are emotionally upsetting. In an effort to help those that believe they might have bed bug bites but are not sure, we are asking people to send us pictures and videos of their bed bug bites. We will post them on our blog in order to educate our readers.

The pictures and videos can be useful for those trying to figure out if bed bugs or other types of insects have attacked them. For those that want to contribute to our collection of photographs and videos please send them to info@sternenvironmental.com and your submissions will be truly appreciated.

A large number of people living in NJ, NYC and all over the country and the world believe they have been victims of the odious bed bugs but actually they have been victims of other insects or something else. Medical experts are not always correct with their analysis of skin irritations, including bed bug bites. Having the opportunity to view actual bed bug bites can be quite useful to the public. We would really appreciate your help with this project.

Those annoying bed bugs are known for leaving itchy red marks on the surface of the skin after they bite their victims. The bites are often in a form of a cluster and some times form a line. Yes the scratching is terrible and the red marks are not considered to be status symbols but some people have it even worse after the bed bugs take some of their blood for a meal. They develop allergic reactions to the bites. Some people have red bumps that are approximately 8 inches wide. Blisters are created, small sacs of pus are produced and dilation of the capillaries located beneath the skin occurs. If these stronger symptoms appear  it’s time to see your doctor.

It should be noted that doctors recommend that victims avoid scratching the affected areas because infections can occur. If you have an infection antibiotics may be needed.

People are typically embarrassed about having bed bug bites and they are concerned about being somewhat ostracized by neighbors and co-workers. They often stay quite about the bed bug bites. However,  if the bites become serious at least tell your doctor.