Research undertaken in New York City by microbiologists focused on collecting the furry creatures and analyzing the bacteria and potential diseases they carry. Several of the city’s boroughs were the target for collection of the specimens, which were gathered from residential and commercial buildings.

It’s a known fact that mice carry a variety of diseases such as Leptospira, Shigella, Clostridium difficile, E. coli, and salmonella.

During the research project, a total of 36 viruses were found. Among these, six were new. Although the six new viruses did not pose a threat to humans, other bacteria in the mice could be spread to humans.

Drug-resistant disease-causing bacteria is a concern and the research brought to light the extent that this antibiotic resistance may be.

Because New York is one of the most visited cities in the U.S., it is important that research continue to be developed to explore and understand these diseases and their potential effect on humans.

Whether you live in a house, apartment, or condominium, or your job brings you to the city, having a NJ Pest Control inspect and treat your space is a smart step to take to promote good health.

If you’re concerned about mice inside or outside your home or business, get some peace of mind with a NJ pest control specialist from Stern Environmental who will inspect your property. Call today to schedule an appointment.

Seeing a few mice running around your building can be an alarming sight. In addition to leaving droppings around and getting into any food you have, these pests can also carry infectious diseases.

If you’ve seen mice around, should you hire a NYC rodent control service firm? Keep in mind that mice can transmit disease to humans through direct or indirect contact. Direct contact includes being bitten, accidentally touching droppings or touching mice that are alive or dead. Indirect contact occurs when mites or fleas that feed on infected mice bite humans. Some of the infectious diseases that mice can spread include the following:

Mice can also be a health hazard if they trigger allergic reactions or spread salmonella and other food-borne illnesses that can cause serious health problems.

If you have a mouse problem in your building, don’t put your tenants or employees at risk. Contact Stern Environmental Group for safe and reliable NYC rodent control services.

A mouse may look cute in a cartoon, but mice are a nuisance when they infiltrate your apartment, office building, restaurant and store. They are dirty and they can carry diseases.

Here are a few facts about mice:

Mice must be eradicated to keep your commercial property safe and clean.

Stern Environmental Group sells a special mouse tracking program that finds mice nests and eliminates them. The mice enter a food-based trap that contains florescent powder that provides an ultra-violet track to their nests where they are eradicated.

Contact us today to learn more about this method of eliminating  mice in your commercial buildings in New York City and New Jersey.

With the winter season approaching quickly, it’s a good idea to start thinking about things you can do to keep mice out of your property or office building. Remember, they can be pretty tricky, but if you learn more about how they behave, you can keep them outside where they belong.

The first thing you should do is take a walk around the perimeter of your property or office building. Look for any small cracks in the foundation. Mice can fit through a very small opening, and if you find any, you should seal them up with foam insulation to keep these critters out.

Seeds are very tempting for mice, and they make an excellent meal. If you have a bird feeder near your properties, consider relocating it to keep mice from being attracted to the dropped seeds.

Pet food bowls are another easy way for mice to find food, and many people keep bowls outside to feed their pets when they’re not indoors. Spilled food is naturally going to happen, so keep a close eye on the bowls and clean up any messes.

Although you might not be able to completely prevent mice from coming inside for the winter, by following these tips, you have a much better chance. However, a mouse infestation is not something to be taken lightly, especially since these pests can multiply quickly. If you spot them inside, contact us right away for an inspection. 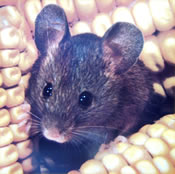 Research has shown that the house mouse has proven to be very intelligent.  In fact, mammalogists around the world rate the common house mouse as the second most successful mammal on earth, trailing behind humans.

The house mouse is able to live and thrive under a variety of conditions.  You will easily find them in homes, business, open fields and agricultural areas.  The house mouse may look unassuming and even cute to some people, with their oversized ears and small eyes, but they are considered to be a troublesome pest that seriously impacts the economy in all parts of the United States.

The house mouse can be gray or brown in color with a white belly, weighs ½ ounce, and will grow to about 7 inches long (including the tail) at adulthood.  New York City pest control experts report that the house mouse is a serious threat to homes and commercial structures because they consume and contaminate massive amounts of food products.  They prefer to dine on cereal grains, but will eat any food that is meant for humans or pets.  Mice can enter a structure via holes as small as the size of a pencil so it’s important to seal up holes to ensure that mice are kept outdoors.

Besides the economic problems that having mice create, mice can also cause serious health problems for humans.  Hantavirus Pulmonary Syndrome is a common rodent-borne disease that is contracted by humans, which is fatal in over half of the diagnosed cases.  Hantavirus is transmitted when the dust that is contaminated in rodent urine or feces is breathed in.  Hantavirus often goes undetected because the symptoms mimic the flu with headaches, nausea, rapid shallow breathing, vomiting and dry cough.  Humans are also at risk of contracting Lymphocytic Chorio-meningitis (LCM) and Salmonellosis from the house mouse.

Properly controlling mice can be achieved by hiring a New York City pest control expert with experience in mice removal.