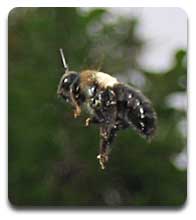 Spring is here and along with the flowers, beautiful warm weather and pollen; come small creatures that have people big and small running for cover.  Wasps are common pesky critters that certainly warrant attention.

There are four common types of wasps that can be found in the average yard.  Some are docile creature and others are more aggressive ones that you should avoid.  It should also be noted the Carpet Beetles, which are hard to control, tend to gather where wasp nests form, so it is a good idea to get rid of wasps as soon as you can.

Often time’s homeowners will see a wasp nest being built up under eaves, porches, deck railing, and even playground equipment.  These wasps are not usually aggressive unless you try to disturb their nests.  The nests are built by the females from a blend of saliva and wood.  These wasps are considered good to have around because they do eat insects that cause damage to plants, but bad because nobody wants to experience their sting.  These types of wasps are called Paper Wasps.

The Solitary Wasp is the one that usually hangs out alone.  They zip by you in your yard and don’t pay much mind to humans.  They have a long and thin body with minimal color.  Since they travel alone, they are not territorial or aggressive in most cases.  They mostly dine on garden pests like beetles and aphids.

Please check back on Tuesday for more wasp information.

The pest control experts at Stern Environmental not only eliminate pests they often write about them. Stern Environmental has created a bed bugs/pest control web page that includes articles that comprehensively examine a variety of issues regarding bed bugs, such as who is responsible to pay for bed bugs pest control services, college dorms and bed bugs, the hospitality industry and bed bugs, has there really been a bed bugs invasion, bed bugs and real estate and other issues.

Douglas Stern, the Managing Partner of Stern Environmental has actually been interviewed by the Wall Street Journal regarding bed bugs and the web page includes a link to the insightful article. The web page even has a link to bed bugs pictures and also bed bugs bite marks. Not pretty but informative.

I know, some of you are wondering, well what about those pests known as wolverines? Well, we don’t have any insight about those critters but our web page does include astute articles about scarier critters such as rodents, rats and mice. For those of you who want information on bees and wasps, yes we have it on the web page.

If you actually have bed bugs ask a NJ, NYC bed bugs pest control expert to destroy them.